Having aimed to beat his personal best of 58 minutes and 12 seconds in the annual Regent’s Park 10K Challenge on Sunday 17 November, PAC’s Chief Executive Officer Peter Sandiford was more than a little taken aback to find that the official results page had listed his time as almost two hours – and placed him last among the event’s 503 competitors! 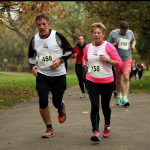 Peter and Julie, still neck and neck (although not for long)

A swift phone call soon restored honour – Peter had indeed beaten his personal best (albeit by just one second), but a technical glitch meant that his timing chip had recorded neither his start nor finish time. Instead, following a leisurely post-run coffee and sausage butty with other team members in the park, it had logged the time Peter sauntered back over the finish line on his way home!

With the matter cleared up, it only remained for Peter – who has recently had major operations to his neck and knee and an artificial hip fitted – to reassure PAC staff (repeatedly!) that he was not in the least put out at having been pipped to the post by over a minute by his wife Julie Elston’s time of 57 minutes and 7 seconds!

In all, a team of twelve runners and walkers once more braved the elements to participate in the annual fun run.

Leading the field among the PAC team was Robert Hammond, who completed the course in an outstanding 44 minutes 52 seconds, gaining 63rd place overall.

Paul Fretton, Chair of PAC's Board of Trustees

PAC’s new Chair of the Board of Trustees, Paul Fretten, and his daughter Amy both romped in with identical times of 50:34 – although rather unfairly the race results rank Amy one position below, a fate which also befell Kate Grimmond, who exactly matched Katy Uden’s very respectable 53:58. Kate and Katy were recruited to the team from PAC’s accountants the Crossley Group – many thanks, ladies!

All funds raised will contribute towards PAC's vital ongoing work with adults, children and families affected by adoption and/or other forms of permanent care.