On Sunday 31 July, our team of cyclists Frank Smith, Martin Land and Juho Lahdenpera, geared up to take on RideLondon100 2016. Starting at Olympic Park, the team pedalled their way through London and into the Surrey countryside following an impressive 100-mile route. The day was a huge success and despite the early start, a fantastic time was had by all.

PAC-UK would like to say a huge thank you to all those who donated and helped to raise an incredible £4,025 so far!

You can still sponsor our 2016 team on their Virgin Money Giving Page. Every penny you donate will contribute towards PAC-UK's vital work with adults, children and families affected by adoption and /or other forms of permanent care.

Your help will make a real difference to people struggling with the impact of a traumatic past. We really appreciate all your support and thank you for any donations! 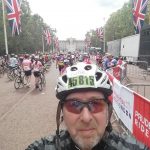 “What really surprised me about this event was the level of vocal support all along the route. It just shows that the majority of people in this country do care when it comes to helping others, even if they cannot take part personally. In raising the sponsorship I was also quite touched by the number of people who had a personal connection to adoption; people I have known for many years in some cases. Despite the delays (and my best wishes go out to the two cyclists who were injured) it was very well organised, even down to planning the good weather. To the people of Pyrford, I say a big thank you for topping up my water bottle (via a garden hose!) and showing good humour, despite 10,000 cyclists gate-crashing their village fete and effectively kidnapping their village for an a hour. Thanks also to the family in West Horsley who provided me with a bacon butty! A brilliant day out and an experience I would encourage anyone with a bike to get involved in.” 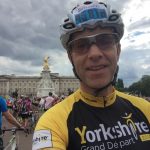 “Riding the London:Surrey 100 for PAC-UK was superb, and thanks to all friends and family for the sponsorship. The atmosphere throughout was great, starting with riding down Oxford Street on the well signed route to the start, to the encouragement from so many people along the way – from sleepy West London to Wimbledon High Street. I stopped at Weybridge for a much needed cup of tea after about 36 miles (it’s not a race after all!). Chatting to customers in the café I explained I was riding for PAC-UK and quickly got into a conversation with a woman who turned out to be a Social Worker, and so mid-ride ended up having quite a conversation about the importance of supporting people affected by adoption. Back on the ride it was terrific to see beautiful places like Hampton Court, Box Hill and the villages of leafy Surrey. Heading back into town, it was exhilarating to be whizzing down wide boulevards like Millbank on the ‘wrong’ side of the road, free of traffic, and nearing the finish on The Mall. The volunteers who guarded us from traffic and prevented cars at every single junction along the route were terrific – that took some organisation. It was a memorable and moving day.” 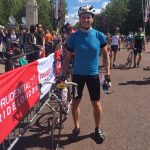 Juho Lahdenpera at the finish line!

“I had a great day out at Ridelondon! The route was fantastic and even the weather was good. Definitely worth the 3.30am wake up for a 6am start. The ride was quicker than I thought, I finished in 4 hours 47 minutes, cheered on by the crowds and motivated by raising funds for a great cause. My shoulder held up well despite the injury only four weeks before the event. Thanks to everyone who sponsored me and PAC-UK, it made this event very special for me!”

Inspired by our 2016 RideLondon 100 Team? PAC-UK staff and supporters participate in a number of regular sporting and fundraising events each year. Visit our Events page for more information!