On Saturday 27th June PAC-UK’s very own Team Administrator Apprentice Sophie Kemp fulfilled her long-standing ambition of "hurling myself out of a plane" to raise awareness and funds for PAC-UK!

In a last-minute twist Sophie decided to accomplish her skydive wearing a  pair of Frank Skinner's old Elvis pants which the comedian had donated to a previous PAC-UK auction. Sophie has been in contact with the producer of Frank's Absolute Radio show and is hopeful of further promotion for her fundraising initiative.

I wasn't looking forward to waking up at 5am on the morning of my skydive. My stomach was churning and I found myself getting rather emotional - knowing that in a few hours' time I'd be falling from the sky wasn't really going down too well!

Once we arrived at the skydive centre my nerves really kicked in. I was given a briefing of how to exit the plane and how to safely land and then the wait was on. Everyone was standing around waiting for their name to be called out and told it was their time to fly. As the first list of names was read out I prayed it wouldn't include me. Thankfully it didn't and I sighed a huge breath of relief.

Watching the first group of jumpers go up seemed to calm my nerves at first but then reality sank in and I realised that was soon that would be me! The next group of names was called out and this time I was in it. My mum, dad and sister all gave me a huge cuddle and off I went to get suited up. Putting Frank Skinner's pants on over my jumpsuit was slightly more uncomfortable than I expected and there were definitely a few odd looks thrown my way!

My instructor came out and did his best to calm my nerves and I was also greeted by the cameraman who started filming us. We climbed into the plane and everyone squeezed into place. From that moment I completely zoned out and wasn't really paying attention to anything around me. Before I knew it, my instructor and I were shuffling towards the open door of the plane. I sat on the edge, tucked my legs under like we were instructed to do and before I even got the chance to think about it my instructor pushed us off!

The free fall was like nothing I'd ever imagined. I felt like I was never going to stop falling and it was absolutely breathtaking (quite literally!). The parachute was deployed after about 30 seconds and then I could begin to take in the amazing views. All in all, it was the most amazing experience of my life and I would jump (again, quite literally) at the chance to do it again!

Sophie is delighted to announce that she has now exceeded her £1,000 target, however her fundraising page remains open for several more weeks so please do donate - every penny raised will help PAC-UK to continue its vital work supporting all those involved in adoption or other forms of permanent care. 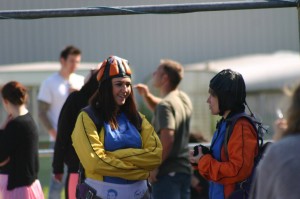 The nerves are kicking in! 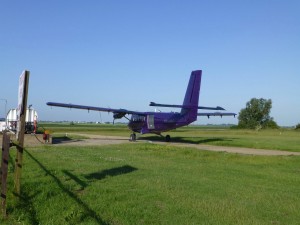 A purple plane? Can this be right? 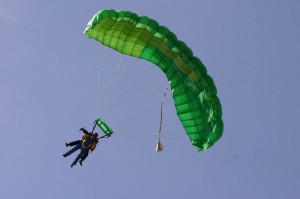 Confident of survival at this point 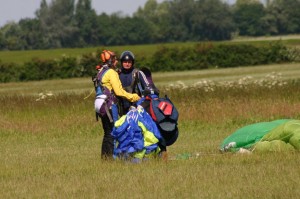 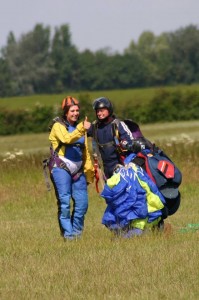 Everything still seems to be functioning… 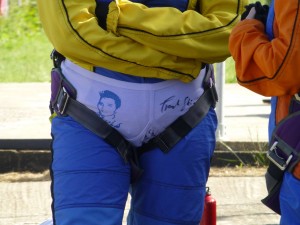 All Shook Up – but Frank’s pants survived!