Franca Brenninkmeyer, Head of Child & Family Service (London) at PAC-UK, with her colleague Sue Dromey, Integrative Child Psychologist and Practice Manager at PAC-UK, led a conference on post-adoption practice at Taisho University, in Tokyo on 23 November 2018. The conference was organised by ISSJ and funded by the Nippon Foundation.

They had been invited by the International Social Service Japan (ISSJ) to present on a range of topics, ranging from an overview of PAC-UK’s model of working with adoptive families to practical methods for professionals making good assessments of adopters and assessing adoption support needs in children and parents. Exploring best practice for professionals supporting adoptive parents and helping adopted children with their Life Story work were also addressed. Adoptive parents attended the second half of the afternoon when therapeutic parenting skills as well as guidance for parents on how to talk to their children about adoption and their Life Story were covered. 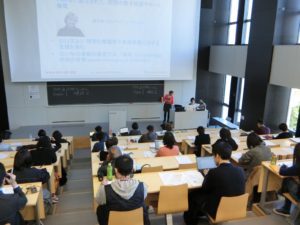 The invitation from the ISSJ arose from a long-standing, mutually enriching relationship with PAC-UK. There have been a number of visits from social workers and Professor Kamikado to PAC-UK’s London office since 2011. Best practice in the adoption and permanency sector from each country was shared and learnt about, as the UK’s approach is different to the Japanese in a number of ways.

The main difference between each country’s approach is the emphasis placed on the importance of blood ties. The Japanese system requires birth mothers to formally give permission for their children to be adopted, and many don’t, as thinking of anyone else becoming their child’s mother/father is not reconcilable with still strongly held beliefs regarding blood ties. If permission is not granted, children remain in residential homes where they are cared for and educated, until they come of age. Of the nearly 39,000 children in orphanages across Japan, just 12% can expect to find foster homes and a very small percentage will be adopted (around 600 last year).

That said, there have been many innovative Japanese projects which have placed the children’s needs more centrally to proceedings, whilst at the same time recognising the importance of the child’s need for information about themselves. This was beautifully illustrated by a young woman approaching Franca, after her lecture, saying how reassured she felt in her decision to contact her birth mother and a sister who had been placed abroad. She then showed Franca footage on her laptop of her birth mother and new parents, immediately before and after her own birth, which had been filmed as part of a pilot project that supported birthparents and permanent carers to meet each other at the time of the infant being born and placed into the new family.

“The fact that the ISSJ are keen for professionals to gain as much knowledge as they can about how best to assess and support adoptive parents in placement, is part of their drive to see the number of adoptions and long term foster placements going up. The ISSJ are equally driven though, to see that the placements will be successful, that is with the right support in place.”

Sue Dromey said how helpful, welcoming and respectful she found her colleagues at the ISSJ. She also commented on how committed they were to developing their skills and services in the adoption sector. 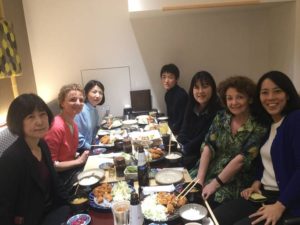 This is reflected in the ISSJ’s motto of ‘Children’s Happiness First’, as well as in the other than adoption services it runs, such as supporting families that have been separated for a variety of reasons and their extensive work with refugees.

We hope that the relationship that has gradually grown between PAC-UK and the ISSJ will continue to develop. One of the professionals did ask at the end of the conference if PAC-UK would be willing to provide some training on supporting birthmothers. We assured them that we would be delighted.

PAC-UK's Child & Family Service provides specialist support for children and families brought together by adoption or other forms of permanent placement.