On Monday 7th November 2011, The Savoy hosted a dinner and charity auction in aid of PAC. Champagne and canapés were followed by a unique three course dinner prepared in the Savoy kitchens by our four Michelin starred chefs. After dinner Lord Dalmeny, Deputy Chairman of Sotheby's conducted an auction of contemporary works of art.

AXA Art Insurance are delighted to be Lead Sponsor of the IMPACT Gala Dinner and Auction. We wholeheartedly support the work of PAC and hope that this evening will raise important funds needed to drive the charity's admirable activity.

This truly unique and inspirational charity evening of Art and Food, was held at the internationally-famous Savoy Hotel in London on Monday, November 7, 2011. 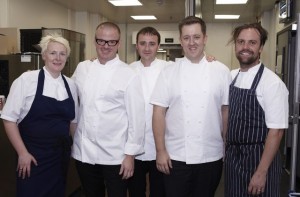 The Chefs at the Savoy

Not only did the evening allow guests to sample amazingly creative food, but there was also the opportunity to purchase artworks by some of the world’s most coveted artists in an auction conducted by Lord Dalmeny, Deputy Chairman of Sotheby’s. The artists ranged from Haroon Mirza – who recently won a ‘Silver Lion’ at Venice Biennale to Ken Howard, Gordon Cheung, Maggi Hambling, James Hart Dyke, James A. Holdsworth, Patrick Hughes, Julian Opie, William Stein, Estelle Thompson and Norman Ackroyd as well as three artists who have first-hand experience of adoption: Russell Young, Claerwen James and Tony Heywood. 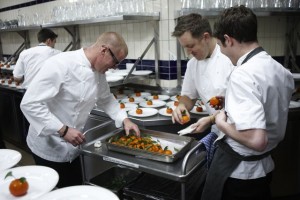 The Gourmet evening was the brainchild of Guardian food writer and ‘Great British Menu’ judge, Matthew Fort, who had the support of PAC almost 25 years ago. He said: “'What a prospect - dishes by some of the country’s most creative chefs; works from some of the country's finest artists - to raise money for a charity that means a great deal to me. It's going to be a mouth-watering, eye-opening evening!”

There was also a silent auction, which included lots such as 1 hour private flower arranging tuition for 2 with Shane Connolly (appointed florist to HRH Prince of Wales); 7 night stay in St. Lucia at Cap Maison; a day at Cheltenham Races for 2; a place on one of the European-guided Art Tours in the 2012 brochure from the Ultimate Travel Company; dinner with Tom Parker Bowles and a signed England football shirt.

The IMPACT Gala Dinner and Auction was also supported by: