More than 2,000 families being helped through life-changing government fund worth over £7 million in the past 6 months. 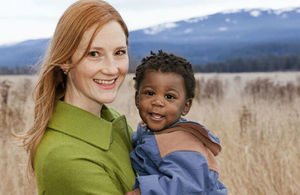 Thousands of adoptive families are now accessing essential therapy services to help their children close the door on previous traumatic experiences and settle into their new life - backed by £7 million of government investment.

Since the introduction of the fund in April 2015 - the most significant reform to adoption support in a generation - applications have been made by every single council the length and breadth of the country.

And to make sure families get the support they need, when they need it, the government has today (20 October 2015) unveiled a new coalition of adoption champions, who will advise - and challenge - ministers on how help and support for families can be improved.

The group will bring together experienced adoptive parents who are determined to make a difference in shaping adoption services both locally and nationally, putting their knowledge and experience to good use for those families on the start of their adoptive journey.

"It’s absolutely fantastic news that over 2,000 adoptive parents across the country are now getting the help and support they need to set their brand new family on the road to a bright future.

"I know from my own personal experience that some children adopted from care have been through terrible ordeals which don’t simply disappear once they have settled with their new families.

"It’s vital that adoptive families get the help they need to transform the lives of their children.

"And it’s adopters who are best placed to tell us how this vital support can be improved. I want to hear from them and put their real-life experiences to the best possible use in improving services for other adoptive families."

The government has also revealed details of the first 14 regional adoption agencies, groups of councils and voluntary adoption agencies coming together with one single purpose - to place children waiting for adoption without delay with their forever family.

At the moment, adoption is happening at too small and localised a scale. One study showed that in around 1 in 3 cases, children were left waiting longer than necessary due to councils’ reluctance to look outside their immediate area for the right family - a further delay to a life full of love and stability.

The government will provide financial and practical support for councils and adoption agencies to enable them to bring services together regionally, and implement the greatest step change in the way children are matched for adoption in a generation.

Today’s announcement is evidence of the government’s commitment to reform the adoption system so children waiting are provided with stable and loving homes much more swiftly, giving them the opportunity to settle and bond with their new family.